From Distribution To The Link Economy

Admit all the changes faced by news organizations, like the lack of monopoly, real-time reporting, creating original content, and the disappearance of print, there seems to be one element that most news people still do not understand. There is no distribution market on the internet - it's a link economy.

Yesterday, I read an article about yet another proposed form of micro-payments, which is nothing new. The newspapers seem to be stuck on only three forms of business models; ads, pay-walls, and the mystical unicorn of micro-payments.

So far, none of them seem to be any good.

But what struck me in that article was this proposed "what-if":

"What if news content owners and creators adopted a variation on the long-established ASCAP-BMI performance rights organization system as a model by which they could collect payment for some of their content when it is distributed outside the boundaries of their own publications and websites?" ...

"Publishers have complained about the perceived misuse of their content by aggregators of all stripes and sizes" ... "But at the same time, many publishers recognize that it's to their advantage to have their content distributed beyond the bounds of their own sites, especially if they can get paid for it.

Everything about this is wrong. It is a print mindset; there is no trace of the internet in those paragraphs.

When it comes too content online, there are three concepts every traditional news organization need to understand:

Today, most traditional news people focus on the first one, and they frown upon the two others But that kind of thinking doesn't work online.

Redistribution in a link economy is waste. All it does is to make duplicates of the same content, and take it away from you. You don't want your content redistributed to another site, or some person's blog. You want the other sites or blogs to *link* to you.

This is the reason I generally do not allow people to republish content form my site, because the path to success is "do what you do best, link to the rest."

"Copying" lowers the value of that content, because it removes it from the source - a critical element in a link economy.

In a link economy, you also get a stream economy, where people become followers of the original source of news. You want people to follow you. You don't want them to follow someone else, using your content (even if they pay for it).

Quoting is an essential element of news. In fact, it is one of the most important elements of any news article. So it's rather odd when news organizations try to prevent quoting.

Quoting isn't a bad thing, because it extends the editorial content, it furthers discussion, and it brings with it new perspective and insights that you might have missed.

Newspapers should embrace linked quoting, not just for themselves, but also via others. When you write an article, some of the best insights are how people respond and extend it. Insights that can often lead to another article (easy investigative reporting) - and a stronger community.

If you look at all the internet media sites, this is a big part of why they are successful.

One example: A few days ago, The Guardian posted an article based solely on people's reactions to earlier news about the new James Bond movie being put on hold.

This is the quote economy.

Everyone wins! And the news just keep growing.

BTW: The second largest Danish newspapers then decided to "republish" the full article from The Guardian, without even a link back to the original article - at which point we have to ask, who is the villain again? The people who quote, and helps you grow - or the people who steal... erhm... sorry, republish... and takes away your readers?

The Power of the Link

The real power of the internet is the link in its many variations. Traditional news organizations frown upon Google News, but that is one of the most insignificant news aggregators around.

The most powerful news aggregator online is the ones maintained by people. The biggest ones are Facebook, Twitter, StumbleUpon and Digg. Not to mention the entire blogosphere. Each one of these are far bigger than Google News - much more powerful, and more disruptive.

We also have sites like Alltop and SmartBrief, which bring us a more editorial form of news aggregation. And finally we have a large number of automated news aggregators, like Tweetmeme, Mediagazer, Techmeme, and of course Google News.

All these, regardless of it is done by individuals or automatic systems, provides an exceptional service. They give free exposure to your content... Free!!

Without the link, you have to do all the hard work of attracting an audience yourself.

Just compare a website for a traditional newspaper, with digital newspapers who embrace the link.

Traditional sites have a relatively large share of direct visitors (because that is the only way to really find them), a varying level of traffic from search engines, and a relatively small amount of link traffic.

Compared to sites like Mashable.com. Not only is it a niche site, for a limited audience, but it is run by only 25 people. Despite that, Mashable has about 14 million readers per month - far more than most traditional news sites.

How can fewer people, in a limited market, beat the socks off big traditional mass-market newspapers? It's simple. They embrace the link, and get a ton of free exposure. That exposure turns into new readers, it helps them position them as valuable to their community, and that helps them grow even further.

Another example is this site. While I'm not even close to be the size of Mashable (I had 340,000 readers in June), 95% came via links. And I estimate that 99.9% of my growth is facilitated by people linking to my content.

This is a wake-up call for traditional media. The reason the internet is so big and so disruptive, is because of the link.

You don't want business models that focuses on licensing and republishing. That's the old print way of doing things, where destinations, and distribution determines your success. We don't have those limitations online, so why base your business on giving other sites your readers?

You want people to connect with you. You want to bring your content to where your readers are. You want to facilitate linking and sharing. But, you do not want to give that to a middleman (another news site).

Republishing (the old way) is bad because it takes away your readers. News aggregation is great because it helps you grow via the link.

Nor do you want to create artificial barriers. The worst example is the pay wall or the iPad apps. When you create a barrier that eliminates the link, you are effectively reducing your potential to only the people you can attract yourself. 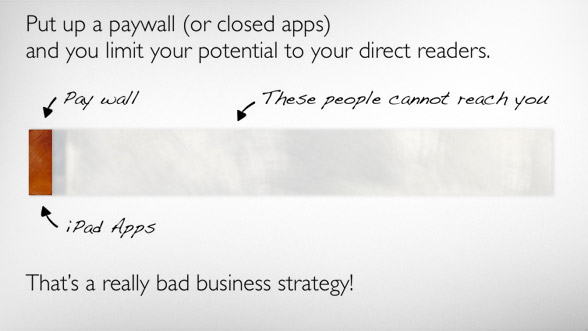 Traditional news organizations think this is a viable solution for two reasons.

1: They create newspapers, not news. Because newspapers have long been focused on reaching a general mass-market, they know that they cannot possibly satisfy each individual reader (and thus each individual news article cannot be sold separately).

To solve this, they turn to the art of selling mystery packages. This is a very effective way to sell lower-value products in a limited market.

If a company has a bunch a stuff they cannot sell as individual items, a good approach is to put it all in a box and sell them as a package for a low price. That is how newspapers are sold. Mystery packages of random news, most of which isn't worth the price? But hey, there so much of it.

This model completely fails online, because you need scarcity to sell a box of low value products - but there is nothing scarce online. We have an abundance of content.

2: Limiting yourself to your direct readers, only works if you already have high traffic levels. The Times estimates that 5% will accept the pay wall (not likely though), and that might work for them because they already have 20 million readers/month.

It doesn't work if you have only 25,000 readers/month, because without sharing, you will not be able to grow. Even print magazines know this. A big reason for print growth is the ability for people to share a magazine with their friends.

One example. The greatest printed science magazine is Denmark is "Illustratreret Videnskab". It has a circulation of 60,000 copies/mounth, but it is read by about 630,000 readers per month.

By putting up a pay-wall (or by moving your content to closed apps), you have no links - no sharing. Thus, you have no influx of new readers coming to your site. And because people cannot link from it either, your engagement level drops like a stone.

Sharing is essential to your business both online and offline. On the internet, sharing is about the link. Without it, you don't have an online business. The pay-wall market is limited to the laggards, the people who do not change. That's the people who still buy CDs.

And they are a dying breed.

Business models that are about licensing your content to other sites, pay walls, closed iPad apps etc. are doomed.

The potential business models online have to be about the link. That has to be a central element, along with unique and targeted content.

Advertising is a proven model for that, but it isn't inversely scalable (you have to be really big before advertising starts to make sense).

9/11 was the first large-scale online news event, and it showed us the trends that we see today

How the media trends of 2001 defines the world today.

Climate change is not a news story. It's a community project.

Health publishing is about to change in a very dramatic way. Here is how

Health publishing is about to move into people's homes, and that requires a different type of health journalism.

trends:
What we (the press) need to change before the next pandemic

trends:
Wars and advertising don't mix... but we also make it harder for ourselves