The Future of News, Tablets, and Business Models

There is much talk these days about tablets and ereaders. Not only do we have the constant rumor that Apple is making one, but it seems like every newspaper on the planet see them as the "prophet" that will save them from their doom.

Lately, a very impressive tablet reader was showcased to the world - the Time Inc. tablet, featuring how "Sports Illustrated" would work.

It certainly looks impressive. I will even go as far as to call it stunning. No wonder why people call it the future of news... except it isn't. Far from it.

This isn't the future of news. This will not save the newspapers. It will only prolong their demise. This will help the newspaper fight change, to stifle peoples desires, and ultimately make them even more irrelevant.

A long time ago, when the world was changing how we moved around, Henry Ford said, "If I had asked people what they wanted, they would have said faster horses."

He knew that the answer to a faster horse was to build a car. It was to change how we do things. It was to solve the real problem. It was not to use all the new technology to make faster horses.

The tablet of "Sports Illustrated" isn't a car. It is merely a faster horse. Sure it is faster and better than the printed newspaper, but they are not solving the real problem. They are stuck in a world of "how it used to be," and are simply adding technology to it.

There is no change here, there is no real innovation. It's a newspaper on a tablet, and that's not what we want.

What we really want

Let's face it, the newspaper industry is dying because they are no longer needed. They are the middleman between us and the news itself. What we really want is "news," not "newspapers".

The newspapers were created to solve "how to bring news from around the world to you." And in the past there was really no practical way to do that. The old newspaper model, as illustrated below, is to send a reporter out to find news. This is then handed over to the newspaper editors who turn it into a newspaper and deliver it to you.

Another very big part of the newspaper industry is to sell their news to other newspapers. Again, because distance was a problem, and every newspaper had to create a complete package. 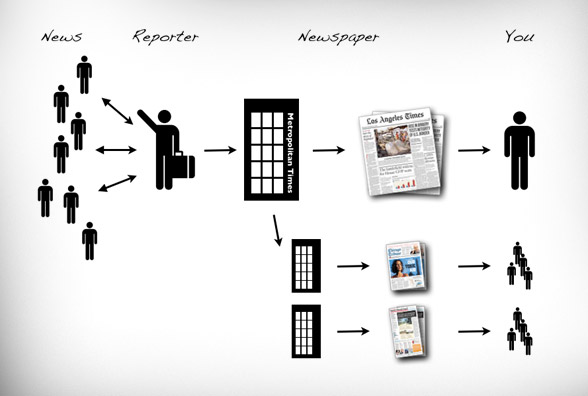 This reporting model is highly visible when you go to Google News, where you can see how many newspapers that reported the same story.

We don't really need 4,497 nearly identical articles (actually most of them are 100% the same, because they are reprinted articles from Reuters or AP). This is the result of an old model where redistribution are the only way to reach your readers.

As Google news clearly illustrates, we no longer have that problem. Today all the newspapers are simply creating noise and clutter. Mass quantities of duplicated content that are hideously expensive to make.

And, this has a dramatic effect on the newspaper business models.

The three models that no longer work are:

The three new models that do work:

The business models of the past are replace by three other models that are centered around connecting news with people. These are:

You can either focus on each market in itself, or be really remarkable by mixing and combining them into a grander experience. 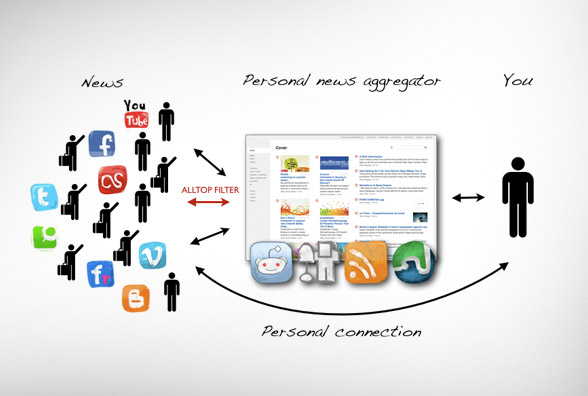 This is the future of news.

Back to the Tablet

Where does all this leave the tablet computer? Well, for one thing it won't save the old newspaper models.

We don't want to start a separate application to read the news from each specific news source. Despite, how fancy they make the application.

Tablet applications, like the one from Sports Illustrated, might delay the change for a short while, simply because they are distracting us with a shiny package. But it's a losing battle.

What we do want is a tablet with a personal news aggregator. An app that can elevate news from multiple sources. Something that gives you a more personal, in depth, and meaningful experience.

Think the "Sports Illustrated" app that isn't limited to "Sports illustrated." One that is tailored to each individual. One that combines news from all kinds of sources - including tweets from the players with commentators from "experts". One that gives you the pictures of the field, pictures taken by the fans, and pictures from the players "backstage". One that uses the power of the crowd, and the sharing of the crowd, to prioritize the content.

More important, one that doesn't result in a destination, but is merely a tool that you can tab into either directly or via other services.

This is the future of newspapers on the tablet.