The Future of Search is More than Social

As you probably know, both Google and Microsoft have entered into a partnership with Twitter and is now incorporating social search into their regular search engines. This is a big deal because social is a very important element of the future of search... it's not the only part though.

When it comes to searching, a search engine is supposed to do one thing very well. Find stuff, from highly relevant and trustworthy sources, in relation to you as a person.

Let me give you an example: Let's pretend that you live in Australia, and that you are looking to buy a new car. You might not know this, but the entire country of Australia is pretty much divided into three types of car owners. People who drive a Holden, people who drives a Ford, and other people who drive something else (yes I'm making a blatant generalization).

But, here is the thing, the reason people drive a Ford over a Holden (or vise versa), isn't because the car is better. It is the result of the community that they are part of. Their friends drive a Ford, their Parents drive a Ford, and the annoying neighbor drives a Holden... so you also drive a Ford.

As human beings we are heavily influenced by what other people use, and depending on who those people are, the more likely we will be influenced by them. 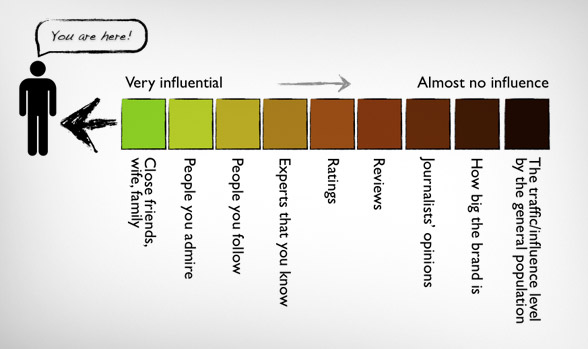 So how does this relate to search? Well, so far, Google and Microsoft have based their searches on things, instead of people. If you searched for recipes for tomato soup, they would find the ones that were most popular by other sites, or their relation to the specific search query. And we get a pretty good result, but from generalized perspective.

Twitter on the other hand is really good at people, or to be more precise, it could be good at it (it isn't really yet). But, Twitter covers what people close to you, in terms of influence, are talking about, and if you can combine that with Google's general results then you have something really spectacular.

If you combine this targeted+personal+influenced+people+content+ranked search result (need a shorter word for that), then we would suddenly get some real answers.

If you search for tomato soup, it will not just find the biggest sites, it will look at your social stream to see whether there are anyone there who are really good, and who has an opinion that matters to you. If you are following a person who is into food, then her opinion is ranked higher than just any regular website.

But more important, it will not just look at the stream, but actually analyze it over time, It will extract what it is really about. It will compare that to many other algorithms, and finally match the content with you as a person.

If you search for Ikea, not only would pages more relevant to you be ranked higher, but also, you would be able to see what people feel about the brand, the specific product, all ranked on how close that source is to you as a person.

And, it is not just search that could use this. Google could create a people-rank API, so other sites like Tweetmeme could rank their content not only based how frequently it is retweeted, but also how it relates to you, and to other people.

So far Google has been really good at things, places, sites or pages, but it lacks relevance because it doesn't know people. Twitter have the people element (although Twitter search doesn't extract any meaning from it), same with Facebook, comments on blogs, reviews on product sites (from real people), rankings, and general activity.

Combine all that and you got the future of search. It is not social, not traditional - but both + it's targeted to you. And it can be used for more than simply searching.