Gawker and The Future Trend of Publishing

Gawker just launched the 'New Gawker' ...starting with Jalopnik. It's a beautiful and simple site (maybe too simple as there are very few cues as how to find more content if you come directly to a single article).

And it is responsive, so it's designed for mobile first. 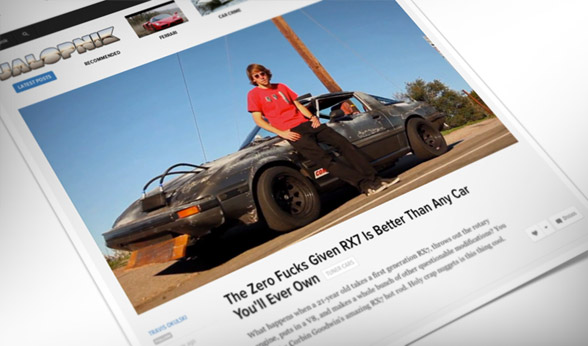 It's built around social:

"There are a few great new tools, including the ability to "heart" stories and comments, as well as "follow" or "block" anyone in the system, including the Jalopnik staff. We've also added image annotation, which will allow you to comment directly on the photos at the top of a post."

But that's not the big news. The big news is that Gawker will combine publishing with a community blog like feature... very similar to Tumblr.

"Have you always wanted a blog in our network? You can do that, too."

"All blogs are created equal. Your blog will look similar to our flagship sites and will have all the same tools, including image annotation. Any user in the Kinja universe can follow you. Tag something "Starfox" and it'll show up on the kinja.com/tag/starfox tag page so other people can find it."

I just created a simple blog to try it out: http://baekdal.kinja.com/ ... and it is really very well made (super simple and yet a very powerful platform). 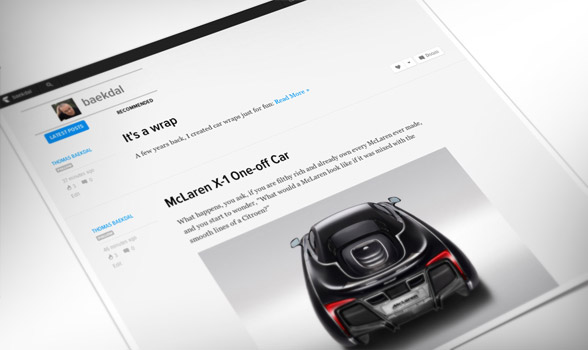 But it doesn't stop there, because you, as a reader (and blogger), can repost any article from the Gawker Network, and Gawker can in turn repost anything that you blog about.

"If you want, you'll also be able to republish articles from our site (and eventually all Gawker sites) and we'll be able to do the same. If we do republish something you created you'll get the byline, the credit, and it'll be clear where it came from."

That's both good and bad, but this does take Huffington Post's 'free blogger' concept to an entirely new level.

And then, of course, they add a bit of encouragement:

"When we look for the next generation of writers for our site, and other sites, we'll be looking at who does well in Kinja."

That's another interesting trend right there (for better and worse). Anyone can be a journalist, and a journalist can come from anywhere.

We can debate Gawker's reasons for doing this (it's obviously to increase page views and exposure). But there are so many trends here:

There are so many really exciting things about this... as I said before, for better and worse.

Some of the problems is that Gawker, like many other platforms, is designed around exploitation... as in getting people to do a whole lot of work for free, which Gawker can then monetize.

We have the problem that it is locking people into a platform that creates a kind of Stockholm syndrome between the blogger and Gawker (similar to what we experience on Facebook).

We have the problem with copyright, in that Gawker's readers can post whatever they want... including content that aren't their own. And Gawker can then republish it, pretending that they didn't know, while getting a ton of traffic.

Those are all big problems.

Gawker, of course, tries to do all of the above... again, for better and worse.

9/11 was the first large-scale online news event, and it showed us the trends that we see today

How the media trends of 2001 defines the world today.

Climate change is not a news story. It's a community project.

Health publishing is about to change in a very dramatic way. Here is how

Health publishing is about to move into people's homes, and that requires a different type of health journalism.

trends:
What we (the press) need to change before the next pandemic

trends:
Wars and advertising don't mix... but we also make it harder for ourselves