Whenever I talk with newspapers, there is one problem that always stands out. It's not that print is dying or that everything is moving to Facebook. It's that people no longer feel that the newspapers are there for them.

If you ask people "Do you think newspapers bring stories relevant to you?", only a tiny number will answer yes. Nobody else sees the relevance anymore.

Mind you, this isn't a new problem. Newspapers have never focused on creating individual relevance. They have always been these disconnected packages of random news. And while this did work before the internet, where people only subscribed to a single newspaper, it just doesn't work in today's digital world.

It's not that it's digital. It's that we now have more choices. Think about it like a bakery. If you are the only bakery in town, you can get away with creating one type of bread for everyone. But if people have ten bakeries to choose from, whoever just focuses on the simple mass-market bread is going to lose.

It's the same with newspapers. They still publish as if they live in a scarcity.

But the problem with lack of relevance isn't just about the choices and the market. It's also that newspapers historically have never considered the interest of their readers. Every day we see newspapers publishing stories that have no relevance to their readers.

The problem starts with how journalists think. Every journalist I know has this idea that they don't have to consider the relevance of the articles they write, because that's for the 'business side' to deal with.

To which he continued.

They are exactly right. The idea that journalists shouldn't have a responsibility to write something that works is insane. This is not how the world works. It didn't actually work in the past either, it was just that people didn't know any better. But today, it's pure insanity to even think this is how things should be done.

Another problem here is that journalists are incredibly reluctant to explore their own markets. They have this idea that it would taint their articles if they knew what people actually wanted.

For instance, at the recent INMA conference in London, the editor of Liverpool Echo said this:

The Liverpool Echo saw a sharp drop in sales at the end of last year after what it described as 'the biggest shake-up in its 136-year history'.

A major redesign saw the paper change its ethos to have less emphasis on crime and more on positive news. In the second half of 2016 it suffered one of the biggest period-on-period drops of any local daily newspaper, according to ABC, dropping 12.3 per cent year on year to an average of 52,389 sales per day.

Liverpool Echo now claims that their redesign has stabilized their decline (at least that's what they told everyone at INMA), but that isn't really what happened. What the numbers show is that after the redesign, they experienced a massive 12.3% drop, and only then did it stabilize.

So, maybe he shouldstart to look at the numbers.

I'm sorry, journalists. But this idea you have that you don't need to consider your markets is a big reason that you are in trouble. And not just financially, but also in terms of how your readers think of you. You are increasingly disconnected from your markets.

I want to illustrate this disconnect with a practical example from the UK. I'm going to use the coverage of UK politics to illustrate why newspapers are no longer seen as relevant.

Before I start, though, I just want to make it clear that I'm not making a political statement here. I'm just talking about the data, the markets, and how that relates to what you do.

Let me start by showing you three graphs. This first graph is from the UK national election in 2015, and illustrates how people actually voted. 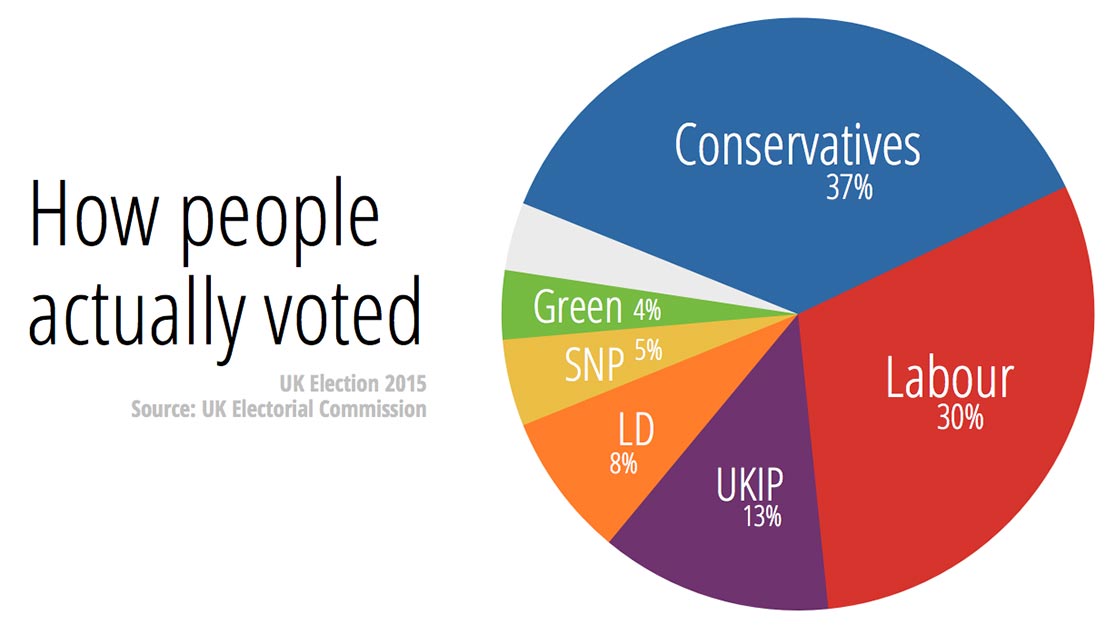 As you can see, the Conservatives got 37% of the votes, Labour 30%, UKIP 13% and so forth. This is what people actually supported.

Now, due to the way UK elections work, the actual government of the UK ended up looking like this: 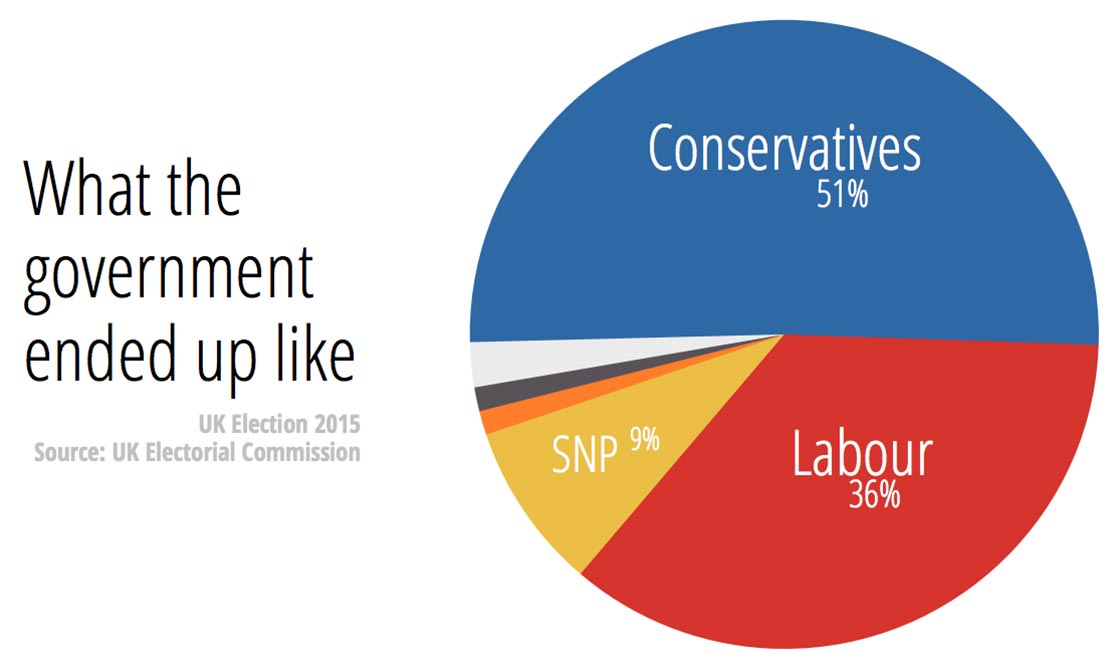 Here you start to see that there is a bit of problem. The Conservatives, with only 37% of public support, now controls 51% of the government, which in practicality means they have 100% of the power.

That's a bit of a problem, which was also brilliantly explained by CGP Grey.

What's happening here is that people no longer feel they are being accurately represented. Sure, the Conservative voters love it, but the remaining 63% of the population feel they are not being heard.

So what does this have to do with the newspapers? Well, let's fast forward to today and look at how the British press is covering Brexit, the vote for whether the UK should stay or leave the EU on June 23.

Reuters Institute did a wonderful study about this. It looked at who the newspapers quoted (gave their voice to) between February 20 and April 20. And the result was this: 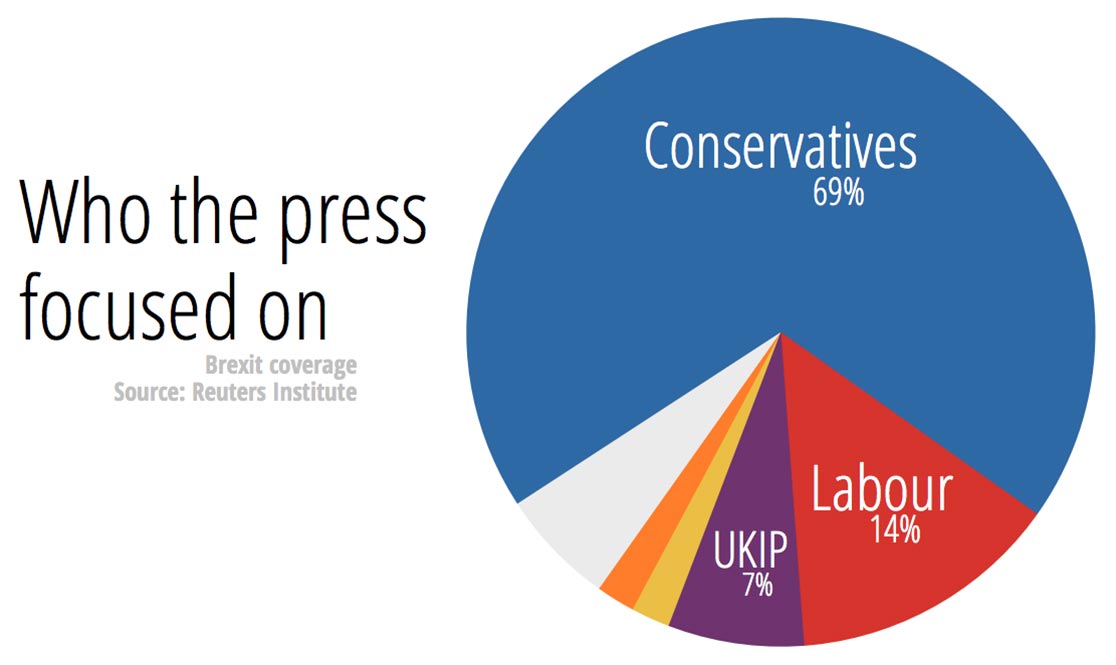 We all understand why this is happening. The Conservatives hold the majority in the government, and thus control the ministries and the important posts, so it's only natural that the press is keeping a close watch on them.

But think about this in terms of relevance, and whether people feel that the newspaper is covering stories that apply to them.

You see the problem?

Again, let me show you the difference between who people votedfor and who the press is quoting.

It's no wonder that people feel disconnected from the news. That's a massive difference in focus.

But it's one thing to talk about who the newspapers are covering; it's another to look at the sentiment of the articles. Journalists usually claim that they are neutral and unbiased, and in many ways they are. But who you interview and the way you cover a story can create a ton of unintentional bias.

This was something Reuters Institute looked at as well. They looked at whether the articles in the newspapers were pro-leave or pro-stay, and the result was this: 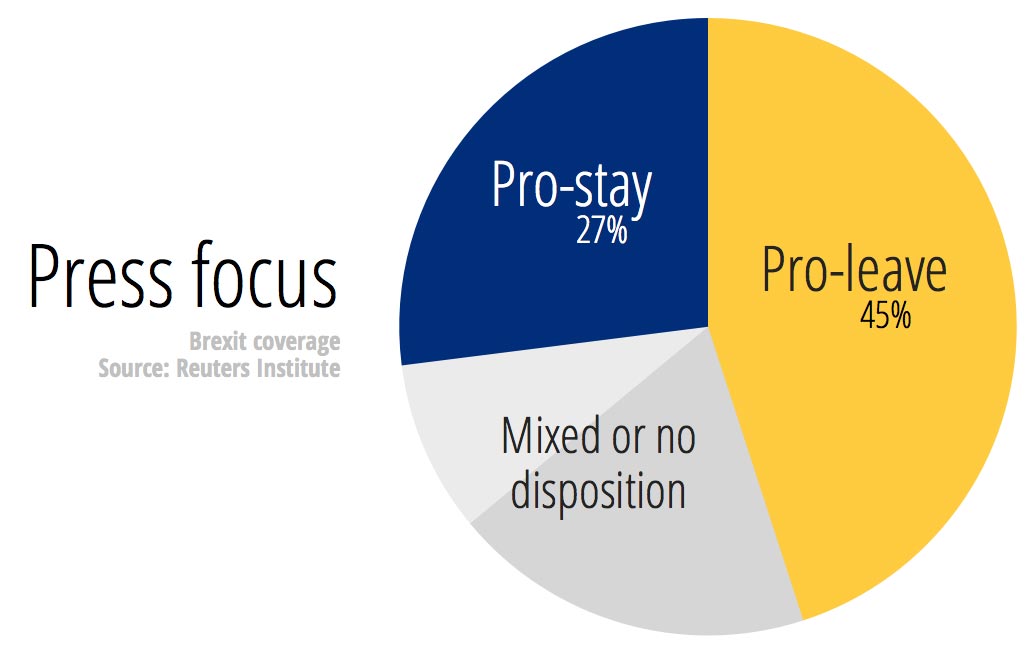 The British press is massively pro-leave.

Of course, there is a bit of difference between the publications. As Reuters Institute wrote:

Positions vary greatly between newspapers. TheDaily Mail included the most pro-leave articles followed by The Daily Express, The Daily Star, The Sun and The Daily Telegraph, while the newspapers including the most pro-remain articles were, in order, The Daily Mirror, The Guardian and The Financial Times. The articles examined in The Times were relatively evenly balanced between the two positions, with a slight preponderance of pro-leave articles. All newspapers, whatever their main position, included some articles from the other point of view, but the proportion of these was smallest in The Daily Express and The Daily Mirror.

We see another big problem if we then compare what the press is doing with the sentiment for each party. The pro-leave stories in the newspapers are basically targeting UKIP voters.

Another place we see this is where we compare Brexit by age, which YouGov also measured. The result is that only 26% of the youngest generation wants to leave the EU.

All of this has a massive impact on relevance.

Your editorial focus is turning most of the younger generation away, because they think what you are focusing on is nonsense. And even for the older generations, for which your focus is a better match, the heavy focus on just one political party means that at least half of them don't feel their voice is being heard.

They are tired of always having to listen to that 'other party'.

But also consider this in relation to the size of the market. If we take the graph above and we compare it to the population density by age, we get this: 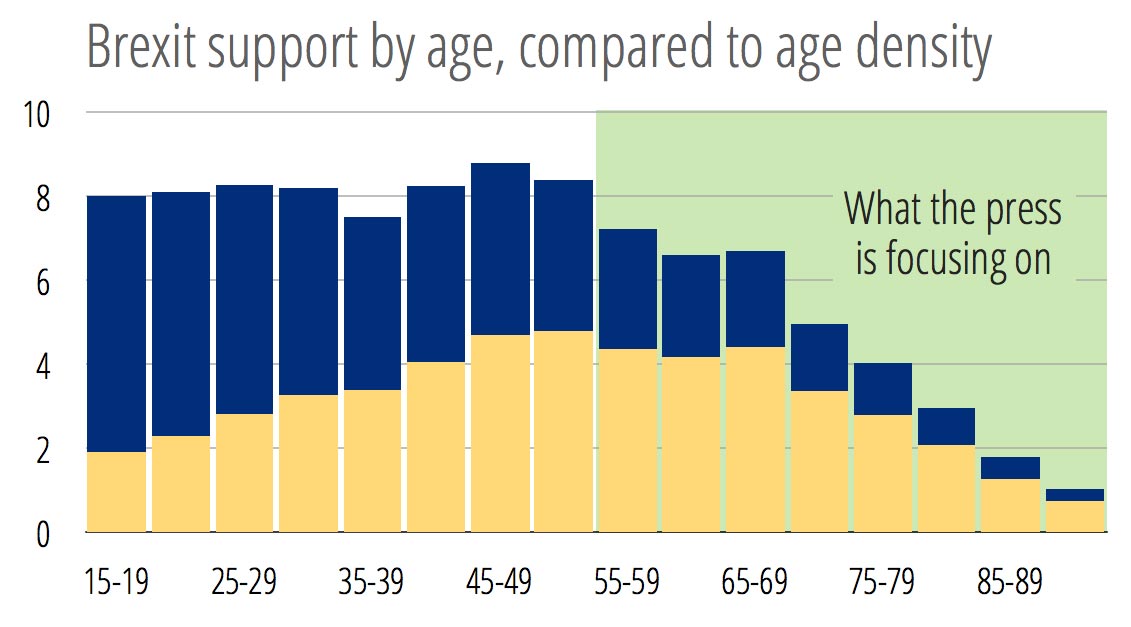 Yes, older people are more skeptical of the EU, but that is also a much smaller market. So, when the British press is leaning heavily towards a pro-leave editorial focus, you are basically writing for that old group of people that isn't that big to begin with.

I also see why newspapers are struggling so much with attracting younger demographics (below 50). Your product isn't designed for them. And this is why you fail.

Newspapers are no longer an institution in which you can just do whatever. Today, the newspaper is a product. A product that needs to reach a market. To do this, you must be in tune with your audience and write articles that are relevant to it.

If you want to reach a different market than the one you reach today, you have to change your product (your editorial focus), and start to listen to what that market needs (and look at the numbers). And newspapers do need to reach a new market. If you look at the circulation data for newspapers overall, we see that the old market isn't where the future is.

This idea that journalists shouldn't bear the responsibility for the success for the newspaper is bullshit. Of course you should. Everyone has to do that, across the entire newspaper organization.

I wrote about the same thing in my article about the future of local news. Here I illustrate another example of how the 'view from nowhere' is the cause of their decline, and how to fix it.

So, as much as journalists don't want to hear this: Welcome to the world of products. Your product is what defines what market you are in, and you are its creator.