The Mobile Shift is Already Here

The reason why so many brands and publishers don't see it, is simply because they don't embrace what it really means to be mobile. It's not a thing; it's us!

The mobile trends are baffling. On one hand, we can all see the trends happening right in front of us. The shift in how we connect with the world has changed dramatically in recent years.

If we look at the mobile trend curves, mobile looks to exceed the desktop in 2013, only one year from today. Facebook and Twitter already have more than 50% of their traffic coming from mobile.

At the same time we have the connected trends, the time-shifting trends, the social trends and the mode-free trends. They all strengthen the mobile trends, increasing the importance of being anywhere, anytime. Mobile, of course, is not about a phone. The mobile trend is not a thing; it's us. We have become mobile.

We used to divide our time into modes. We would be in lean-forward mode at work and in front of our desktop computers at home. We would then be lean-back mode in front of the TV and with a magazine. Today, we have lean-whatever mode. We watch TV while working on our phones and tablets. We cook dinner in the kitchen, while the iPad streams our favorite TV show, while checking Facebook on our phones.

We don't put ourself into modes anymore. We, as people, have become mobile ...even when we are sitting down.

But there is a problem with all this mobile bonanza and the 'shift in 2013' prediction - especially if your are a brand with a web shop or if you are a publisher. When we go into our analytics, most brands do not see the mobile trend. They see an insignificant amount of mobile traffic, and the trend curve don't point to any real change in 2013 - or even in 2018.

Here, for instance, is the mobile graph for this site. There is a long way to 50%.

How can this be? We can all see the mobile trends. We see it for ourself with how we are now connecting with the world. So why don't we see it in our web shops or in our online publications?

Most brands have adopted a 'wait-and-see' approach, apparently waiting for mobile to grow before making a mobile web shop. Publishers try to do it with apps, neglecting the trend that it isn't the phone that is mobile, it's us. An app still requires people to go into a 'mode'. It isn't mobile, it just happens to be on a mobile phone.

I was making the same mistake. While I had launched a mobile site in 2008 (and a mobile app in 2010), it was a separate site and, as such, it broke the connection. It forced people into modes and disrupted the flow sharing. It looked great, but it wasn't really mobile. 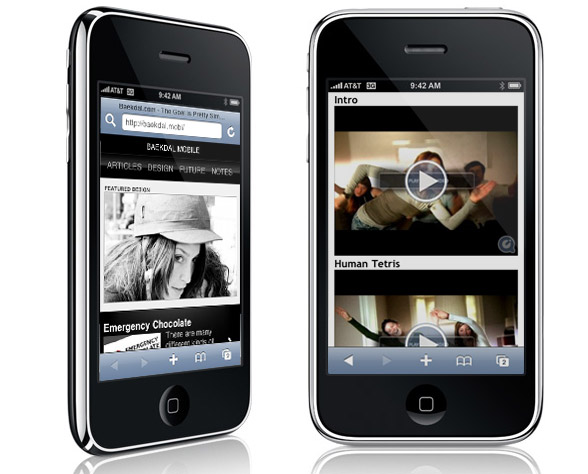 In October 2011, I decided to do something about it. So how do you create a site that is truly mobile? One that doesn't require people to go into modes? One that can be used anywhere, at any time, and on any device - including on your laptop at work. One that encourages time shifting? Embraces that anything can be share from any device, and anyone can then follow that link back on whatever device or platform they use? ...and still 'just work'?

Creating an app was a hopeless solution. It still forces people into modes. You have to convince people to download it before they can read anything. And while you can share from an app, you cannot share to an app. Not to mention that it would be problematic to support every device and every platform out there. The cost would be phenomenal.

A separate mobile site wouldn't do either. While you could detect what device people use and redirect them to the right destination accordingly, it breaks up social tracking. You end up with several links for the same content. Not to mention that you have to maintain and operate two separate sites.

And again, a mobile site is something you create if you think mobile is a phone and not a behavior. That was not the right solution.

The only other option I had was to recreate my site using 'responsive' design. With it, I would have one site that worked anywhere, on any device, and on any platform. Sharing would work the same, links would work no matter what people use, and what the people they share it with saw it on.

So in November 2011 I relaunched the site using a responsive design. The format and layout was exactly the same. I only made very minor changes to the look. But the site could now be used on any device. 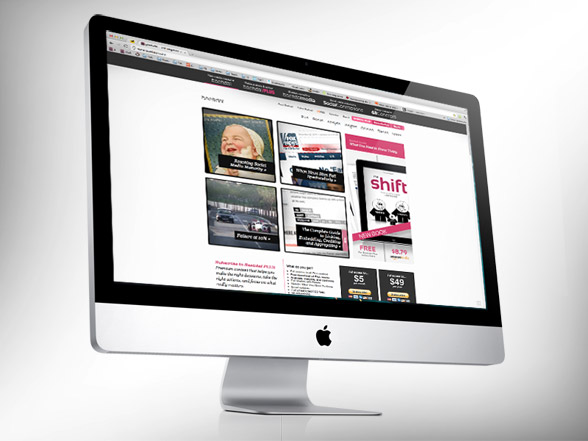 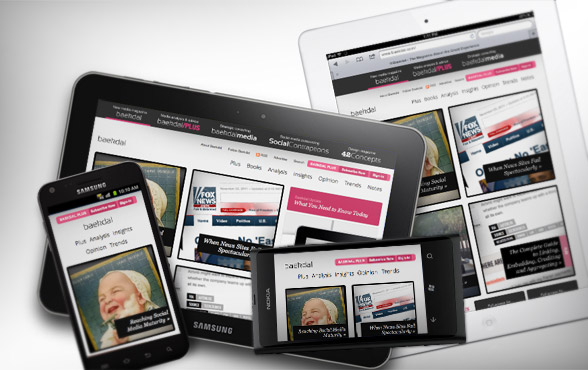 It has now been six months, and it is time evaluate the result. Was creating a responsive design the key to embracing the mobile trends? Remember that mobile traffic is expected to exceed desktop traffic in 2013. A prospect that seemed unlikely in 2011.

Well, here is the result: 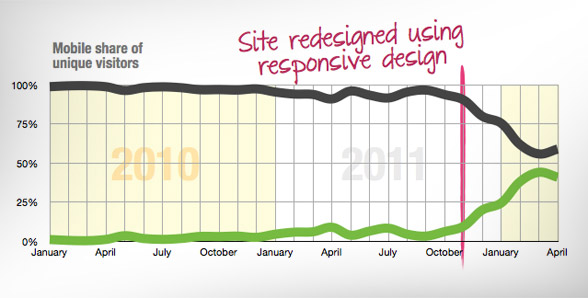 As you can see, in only 6 months, the mobile traffic rate literally exploded. And 'the shift' started happening in November 2011, the same month where I relaunched the site using a responsive design. Nothing else changed.

I expected to see a change, but not as drastic as this. If I look at the mobile traffic trend today, on my site, I have no doubt that mobile will dominate my traffic by 2013, and probably sooner.

It confirms my theory that the mobile trends that are happening all around us are very real. The reason why so many brands and publishers don't see it, is simply because they don't embrace what it really means to be mobile. It's not a thing; it's us!

You are not going to get any mobile traffic until you start embracing what it means to be mobile.

I know that this is just a small test, from only one site. And, I know that my audience is more technically advanced than most. But look at the graph. Before responsive design, I was hovering around 5%. Now, it's closer to 40% (44% mobile traffic in March).

This is not a technology problem. This is a human behavior problem.

If I was working for a brand, I would prioritize embracing mobile as fast as I possible could.

I'm not saying that just by redesigning your site, you are going to get the same result as I did. Mobile is more than pixels, the product you make also has to be relevant in a mobile setting. You need to consider how something is going to be used, as well as how to design your site. It's the same for publishers.

Case in point, if I only look at my Plus content, this is the result: 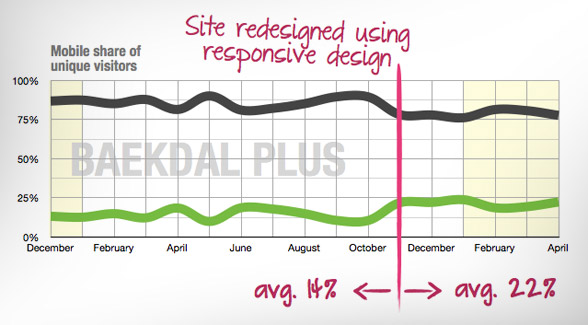 My Plus subscribers had a fairly high mobile rate at around 14% in 2010 and 2011. In 2010, this was much higher than most other sites, as most of my subscribers are digital disrupters and change agents.

When I relaunched using responsive design, mobile adoption rate didn't change as much, but still mobile usage increase by 8 percentage points - to 22%. And again, we can see a direct correlation (and causation).

Keep in mind that the user behavior of a subscriber vs a new visitor is very different. A subscriber is more willing to do things that optimize their reading experience over time (like adding the Plus stream to an app) than a new visitor who just uses whatever he happened to see it on. Subscribers, for instance, use apps like e.g Flipboard, Instapaper or ReadLater far more than other visitors.

Also, since my Plus reports are generally 15-25 pages long, they are best read in a more lean-back setting.

But the point is. The mobile shift is very real. If you don't see it in your analytics yet it's because you are not embracing it. You are keeping your customers in the past.

Embrace mobile now. It's out there, waiting for you to act. But if you don't act soon, it will move on without you.