A couple of days ago, a new study came out looking at what would happen if you started to mix TV only advertising campaigns with digital campaigns. In other words, instead of only doing TV ads, what if you did both TV and digital at the same time?

And what they found was very interesting, but what didn't find is perhaps even more interesting. So here is the story.

The study looked at what would happen if brands shifted parts of their TV only budgets to digital channels, and what they found was that it helped across the board. 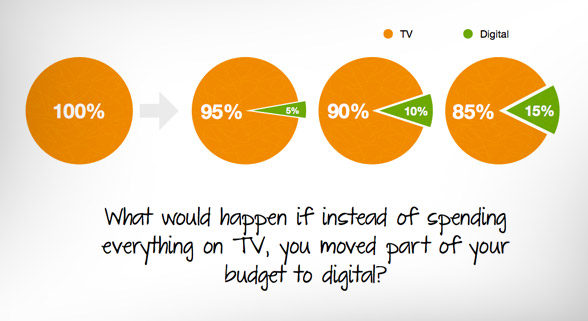 Not only did shifting TV ad budget to digital result in increased reach, but that reach was more effective. The combination of digital advertising and television commercials was found to be a particularly potent mix, with duplicated reach shown to be more effective on key brand effect metrics than either platform alone. Research demonstrated that planning and running video ads online prior to TV boosts brand recall for that same ad playing on television by 33 percent. There were similar gains when it came to online display ads, with consumers 25 percent more likely to recall the brand if they had seen the display ad before seeing the ad on TV.

And here is what that looks like in the form of a graph. First we see that the more you move to digital, the more effective a reach you get:

And on top of this you also get a lower CPM costs.

In other words, you reach more people, you reach them more efficiently, and it costs less money.

How cool is that?

The study then goes on to look at brand recall rates for when people see the ad more than once, which is definitely worth a look. But let's leave it at this for a moment and talk about what they didn't find.

Based on the above results, the study points out that you will get a better result with a 15% digital versus 85% TV split. And this was what many media sites reported.

But that's not actually true, is it?

What they actually found were two things:

But they only measured recall rates between TV and digital. What if they had measured the same effect between digital and digital? That is, what if the TV budget was 0%, but people would still be exposed to an ad more than once?

What would happen if they continued to measure the shift? Would that be even better?

Would the overall reach continue to grow? ...or would it at some point start to decline as the TV split gets closer and closer to zero?

The study doesn't tell us, but what we do know is that digital advertising is a much cheaper form of advertising than TV. Meaning it would be extremely beneficial to to shift as much away from TV as we can while still maintaining the same effect.

The study clearly shows that shifting *at least* 15% to digital is better. What we don't know is how much further we could go.

Now ask the same question about print. Would you see the same effect if you shifted parts (or all) of your print budget to digital?

While TV and print are two very different platforms, they are both legacy advertising formats based on a disconnected broadcast model.

Clearly we need to study this further.

In my experience, the right thing to do is to mix your channels. And I don't necessarily mean TV+digital. I mean digital+social+direct+email+window+instore+coffee shop+magazine+billboard+TV+event+sponsorship.

The general rule is that multiple points of exposure is far better than any single channel. The trick is to be at as many places at possible, but make each channel relevant within its own niche.