When is Something Dead?

I often say that something is dead in my articles. Traditional marketing is dead, print is dead, broadcasting is dead, etc. And almost every time I say this, someone points out that it (whatever that is) isn't dead "because you can still buy LPs."

But in the business world, "dead" doesn't mean "gone." It means that it is no longer a priority. Yes, you can still go out and buy LPs, but as an industry, you would be quite foolish to focus on LPs first and digital second - like you had to in the 1960s.

Here is a graph explaining when something is dead. You have two curves. The red one being the traditional industry, dropping from it former dominant position. And the new emerging industry is slowly gaining speed. 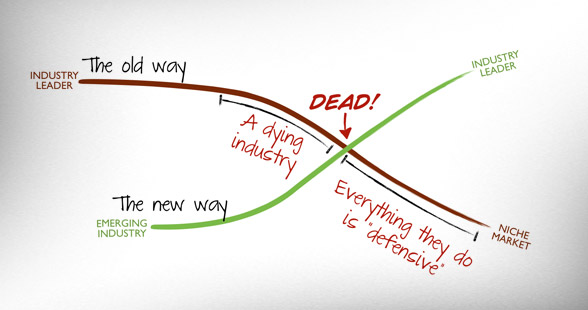 The old world might still be a strong market. But it doesn't matter, because if you from that point onward give people a choice of e.g. "What do you want? Print or digital?" The majority will prefer digital.

At that point, everything changes. You have to shift your entire business to the new world. The new industry has to be your main focus area. Before this point, your strategy could be "print first and digital second." After this point, it has to be "digital first and print second."

And it is not just about the format. It is also about how you do it, and why you do it.

More to the point, everything you do to protect the old way, after it is "dead", is going to be defensive. You are trying to prevent people from changing - and that is a terrible business strategy. You need to accept the shift and look at the old market as a niche for traditionalist. The people who do not *want* to change.

When I say something is dead, I do not mean it is gone. It means that it is dead compared to what you should focus on.

Read also: What You Should Plan, Do, and Support.